Home > Childrens Safety > Not Too Safe 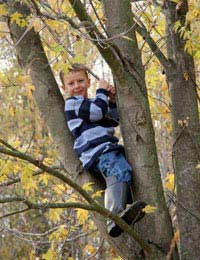 Are your children too wrapped up in cotton wool to see the road ahead of them? Recent government calls for “common sense parenting” have prompted many parents to reassess the level of protection given to their children. There’s a fine line between safe and swaddled. How do we equip our children for the real world without threatening their independence?

In our efforts to keep children safe from dangers like kidnap, road accidents, poisoning and theft, it’s important that we don’t give them feelings of insecurity – or harness their natural independence.

What are the Real Risks?

The best way to protect your children is to identify the real risks – and act to prevent them.

Of course it isn’t easy to give children freedom when you’re an anxious parent. But there are ways around it. Many parents operate a ‘surveillance’ programme to give their children the feeling of independence without losing touch. Neighbouring parents often allow children to play together on the street green or a local park, ensuring there is somebody nearby to keep a discreet eye on everyone.

Parents who can’t allow their children to walk to school arrange trips to safe places such as playgrounds and beaches, where kids can let off some steam within adult supervision. Other parents arrange school-walking groups, accompanied by a different parent every day, to get their children active and sociable. Then there’s the mobile phone monitoring system, which you can use to check on your child’s whereabouts at all times. Whatever you do, make sure that your child protection policy includes some time for your children to be alone and discover things for themselves. We all need to fall out of a tree now and again...

Staying Safe When Walking to School

What is Stranger Danger