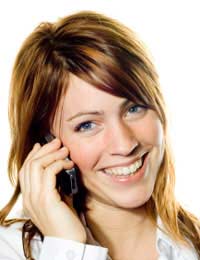 Don't Show Off Your Mobile Phone

Louise warns against making a show of your mobile phone in public places. Even showing off your mobile phone to your friends or visibly displaying your mobile phone on a table in front of you can encourage a would-be thief to steal it, particularly if it is a desirable or expensive model. Louise says, “I make sure that I have my mobile phone with me at all times. Usually it will stay in my pocket unless I receive a call or text message, or need to check the time. This reduces the opportunity that a thief has to take it from me”.

Using Your Mobile Phone in Public

In line with advice from personal safety experts, Louise never gives out her mobile phone number to people that she doesn't know. She also makes a point of not answering her mobile phone if she does not recognise the number, or if it the caller's number does not show up on the screen.

It is often recommended that you lock your mobile phone's keypad when it is not in use. This means that even if a thief does take off with your mobile phone, he or she cannot use it if they don't know the PIN to unlock it. This is not always possible though, depending on the type of mobile phone that you have. Louise's mobile phone does not have this security option, although she would make use of it if it did.

Experts have warned against using mobile phones too frequently because of the possible effects of radiation, but as is the case with many young people, Louise admits that radiation fears are not a big concern to her. She says, “I mainly use my mobile phone to send and receive text messages, so it isn't constantly glued to my ear. In the average week, I probably make a few quick calls, but I don't make long calls that often”.