Home > Case Studies > How I Protect My Kids Online: A Case Study

How I Protect My Kids Online: A Case Study 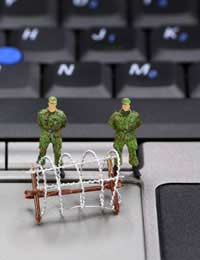 Tracey Deans takes her children’s safety seriously – and this extends to their use of computers. “Kieran is 11 and Daniel is 9 and they are both far more computer savvy than their Dad or I.” It would have been easy for Tracey to have felt overwhelmed by unfamiliar technology but the subject was too important and she and husband Kevin have made a point of making their computers as safe as possible for their sons.

Firstly the boys don’t have computers in their bedrooms. “It is a bit unpopular at times as their friends all seem to have computers in their rooms but they have got used to it”. Instead the boys each have a PC in the family living room. “It means that when they are on the computer they are visible to Kevin and me. We don’t hover over their shoulders but we are able to keep an eye on what they are looking at.” Tracey feels it is important that the boys’ computer activity takes place in the family setting.

“Not only can we see what websites they are visiting we can also see how much time they are spending online.” Tracey has a limit of two hours computer use a day for the boys in addition to time they spend online researching answers to their homework. She is keen that they don’t become addicted to playing games or social networking sites and makes sure that they play outside every day. “I don’t want a couple of unhealthy couch potatoes”. Luckily both boys enjoy cycling and Kieran also plays for a local football team while Daniel plays rugby. Tracey feels that this helps the boys to realise that there is more to life than staring at a computer screen. “It’s all about a healthy balance.”

The computer area has been set up to be safe and comfortable for the boys. There are no tangled leads and there are adjustable seats so that the boys can sit in comfort and view the screen at eye level.

Tracey and Kevin have taken steps to protect the safety of the boys PCs. They have chosen a high security setting on the control panel of each computer and have also installed Google Safe Search which screens out adult content from its searches. “We were able to lock it as well so that the boys can’t sneakily disable Safe Search – their computer skills are so much better than ours!”

When the boys were younger and first went online Tracey actually surfed with them. Now the boys have an agreement with their parents about which sites they will visit. The boys also know that Tracey regularly reviews their search history on the web browser. “It might seem a bit intrusive but it keeps us in touch with what they’ve been looking at. They are still too young not to need our protection.”

Tracey and Kevin have also instilled in the boys the importance of keeping their personal details private. Kieran has joined a social networking site but Tracey made sure that he chose the highest privacy settings so that only his friends are able to access his profile. “All his friends are on the site so it is a matter of not wanting him to miss out but keeping safe at the same time. We have also drummed into both boys the importance of being wary of strangers online. They know that people may not be who they say they are and that they should stick to their own friends for sharing information and meeting up in real life.” The boys have also been taught to keep their passwords private and not to share them even with their friends.

“There is a balance between us keeping in control and the boys having freedom. We think we’ve got the balance right and I would definitely encourage other parents to keep an eye on their children’s computer use to protect them.”